What does it mean …STEAM? for a decade, I have been attending conferences and visiting schools, many with inspirational stories and videos about integrating STEM and the Arts. I am proud of my work with the Innovative Collaborative, a think tank in the US who is taking stock and advocating for A in STEAM. While there are many fantastic examples in the k-8 sector, I have only seen one example in the high schools.

Typically, the Arts are often an way to make the work pretty or just a last minute add-on. We are not leveraging the resilience, critical thinking and creativity that many of the arts processes can offer STEM. Too often in STEM classes, we are looking for the one right answer to a lab or word problems or projects, which does not reflect the daily activity of STEM professionals on the cutting edge. The art needs to inform the science and the science needs to influence the art.

The inaugural year of the LEO Project (alpha LEONIS) happened during Pandemic learning is a high school example of a transdisciplinary project where science students had an artistic experience. with great success. The mentorship and relationship with the Living Architecture Systems Group, Brilliant Labs, The Riverview Arts Center, the ArtsSmart, Riverview High School and Anglophone East School District is a wonderful example of the community working with students.

We have two publications.

The first one is the Brilliant Labs Newsletter

The second one is a progress report where the wandering path and the layers are made visible. The University of Waterloo’s Living Architecture Systems Group published this on their web page as one of their many projects around the world.

It has been a long time coming, but we finally got a chance to work together. Ever since the Millennial Dream, Code Kids and Sistema documentaries, I have wanted to work with Hemmings House.

I always thought that you had to have the movement before the video, but they helped me to understand that the making of the video is also the start of the movement. We had such great success last year that our students lamented, “Why can’t every student in Atlantic Canada have such an educational experience?”

So we want to make a longer documentary to show the shift in Culture when students get a personalized, trans-disciplinary education that solves real world problems. It builds the competencies and contributes to the Profile of a Learner that we hope to have in our graduates and our citizens.

NB Dept of Education unveiled their hard work to evolving our education system to prepare our students for an uncertain future. They are making tangible and bold steps to becoming the world leader, standing on the edge of education system reform globally.

One of the components of a profile of a learner is student agency. They gave three examples of projects that develop student agency. One of them was initiated by my previous student teacher, now friend and administrator extrordinaire, Nick Mattatall at Bessborough Middle School around a community Garden. The second example is Current Generation.org who are making lights for those in light poverty. The third is around climate change with the floods in Fredericton.

It seems that the UN SDGs are a natural way to inspire and bring context to student learning in addition to empowering students to move with confidence and competence to make a change in the world. Students can make small and large contributions locally and globally. It all matters. They matter.

Here is a small clip of the video, “Profile of a Learner” from the NB Dept of Education.

Our friend Koen Timmers has partnered with the Jane Goodall Foundation to introduce Innovative Labs Schools that will bring modern teaching strategies and opportunities to remote villages. When their RV arrives at a village, they will have computers, interactive whiteboards and a world via the internet at their finger tips. They have devices and connectivity, but can only charge their devices when the RV is in town. What happens during the times between visits?

We are working towards the idea that Current Generation lights will be distributed to the remote villages and that BrightCases will be use to solar charge their laptops.

Connections-Base Learning is a book written by a friend of mine, Sean Robinson from BC, Canada. To me, it is something much deeper than the title of a book, but rather a description of our experience together that seems to have come full circle.

A few years ago, Sean and I used SKYPE to connect our students from the Atlantic Coast to the Pacific Coast. We showed them how to solder and sent them a little starter kit so that they could make a copy of the Colorado Lantern (www.e-b.io). It was a great success, but we soon moved on to other projects and students lost touch with each other. I don’t think either of us knew how important this SKYPE woudl become.

He and I would touch base every once in a while, but never had a chance to really catch up. I was so excited when he won the BC teacher of the year award and there was one of our lights in his video. I was even more excited to find out that there were only two Canadian Teachers who made it to the top 50 Finalists in the Global Teacher Prize by the Varkey Foundation and that it was the two of us! We would both be going to Dubai to represent Canada! How wonderful!

There was something symbolic about us getting up in the early morning before the rest of the VTA’s to go to the top to the world on the 125th floor of the Burj Kalife tower in Dubai. As we travelled, we found out that there were so many connections between us. We both had twins that were premature and now doing fine. We have both been involved with book writing. His is actually published, my book with David Whyley is still in progress, but the two books that I contributed to with Armand Doucet are doing very well. However, perhaps most importantly, we both had a desire to connect our students to each other and to the world in meaningful ways. He even wrote a whole book about it, which I had not yet read.

A better wordsmith than I would come up with some kind of metaphor for the two of us together on the highest man-made structure in the world looking far into the horizon contemplating what got us, both as individuals and as humanity, to this point and where it migth take us. The technology enhanced scopes at the top of the tower allowed us to see what Dubai looks like now, at night and into the past. We talked about how our grandfathers could never have imagined our current world. We pondered how we could prepare our current students for a future world that we cannot equally imagine. What a great feeling and perspective going into the Global Teacher Prize and GESF summit.

Through out the remainder of the GTP/GESF, I was happy to bump into Sean as a long lost friend and reconnect quickly about the days event. it was so busy and exciting that I did not get a chance to read his book that he geneoursly gave to me and signed for me.

Those of you who know me, know how slowly I read. So it was a big surprise to even me, when I started reading Sean’s Connections Based Learning book in almost one sitting. I started on the plane leaving Dubai and finished before landing in Moncton. I was entranced. I loved how he wrote, talking about his students and projects in a personal and practical way and combined it with theory that helps students connect, collaborate and cultivate.

When he told me that Engineering Brightness Canada (now CurrentGeneration.org) was in the book, I expected a sentence and maybe a name drop. Little did I know that Engineering Brightness would show up in some depth and detail in almost every chapter through out the book. I did not know that small interaction began something special. I was so proud to play a small part in what is now their own international movement. They have also looked at making solar charged tablets and are partnering with a solar panel organization. The connections continue, because their partner is also our partner. Tony at Voltaic Systems managed to be connected to both of us- independently. I am so happy that Sean took something small, and made it his own project which has now seen lights in the Dominican and Uganda. More students in Canada are having an evolved Transdisciplinary educational experience and more people living in light poverty have access to clean light. Teachers and students learning through Connections.

Microsoft TransformED published an article about some of the work that my students are doing. Please note, that I am one of 3 CO-FOUNDERS of Engineering Brightness including John Howe and Tracey Winey of Fort Collins, Colorado. 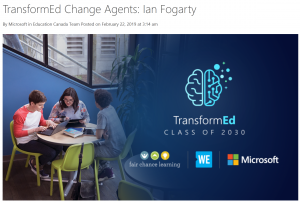 Today, RHS students were interviewed by CBC Radio. The students were super excited and nervous. All of a sudden, physics students need to be able to communicate in an authentic way.

Every year, physics students do engineering projects. I encourage students to follow something that is important to them and push an engineering flavor to the project. Three students decided to attack concussion from Sports. All three students play high contact sports and one was student had already been concussed this semester.

After a hit on the field, an athlete may not be aware of the severity of the hit, or may not want to look weak and not come off the field. They are susceptible to serious secondary injuries.

Students placed a Microbit with an accelerometer in a helmet which communicates with a hand held receiver for the coaches and referees keep track of the health of the players.

This is a great example of transdisciplinary projects, where competencies like communication, collaboration and creativity are intertwined with physics and engineering. 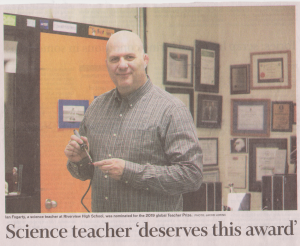